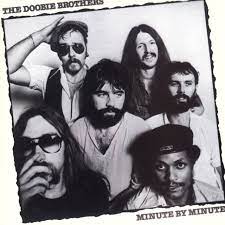 “It’s almost difficult to believe this is the same hippie bar band that came out of California in 1970.” So opined Rolling Stone and it was difficult to disagree with them. Whether or not fans liked it, by the decade’s end, the Doobie Brothers didn’t sound all that much like they did in the beginning. We got evidence of that with Minute By Minute, which came out this day in 1978, their eighth studio album which kept their pace of releasing one new album per year to that point. Judging by the results, most of the fans did like it.

The transition towards smooth pop from “bar band” rock had really begun a little over a year earlier, when Tom Johnston left the band (he does make a cameo doing some background vocals on one track on this album mind you). The band brought in Michael McDonald to replace him, Michael instantly taking over co-leadership of the group with Patrick Simmons, one of the founding members and the creator of their previous big (and decidedly not “rock”) hit, “Blackwater.” Unlike Lennon & McCartney who although quite different often were able to collaborate, Simmons and McDonald appeared two distinct entities and voices. By Minute By Minute, it seemed the tide was turning towards McDonald being the dominant one.

The 10-song, 36 minute work seemed split between the two, with six of them – including all three singles – being primarily written by McDonald and the others by Simmons. Tying it all together was Ted Templeman, their long-time producer. Although the album did have some bits of rock-ish material and an instrumental hoedown (Simmons’ “Steamer Lane Breakdown”) the overall effect was well-produced pop-by-way-of-Blue-eyed-soul… as the singles clearly demonstrated. There was “What A Fool Believes”, which McDonald had penned with Kenny Loggins, the title track and “Depending on You”, the only joint composition between the two main men, sung by Simmons.

If you liked the sound, you’d like the album by and large. Rolling Stone gave it a good 4-star review, making it clear in their review why. They suggested “Simmons numbers are no better than second-rate lounge fare,” but McDonald was “their only hope of becoming something more than a fading, middleweight ‘people’s’ boogie band,” he being the “greatest White blues singer since Joe Cocker (and) also a gifted songwriter.” Allmusic later would grade it the same, but were a little less blunt in their assessment. They call the record “pretty compelling” and where “the ‘new’ Doobie Brothers really make their debut, with a richly soulful sound throughout and emphasis on horns and McDonald’s piano more than on Patrick Simmons or Jeff Baxter’s guitars.” Speaking of Baxter, he perhaps didn’t care for that shift; he quit the band after this one came out.

The album certainly connected with the masses however. “What A Fool Believes” became their second #1 hit at home and also topped charts in Canada, although Britain received it more coolly, reaching just #31 there. “Minute by Minute” and “Depending On You” both were top 30 hits in North America as well, leaving them with a tally of 13 American top 40 hits in the decade, only one shy of the Eagles. The album became their only #1 one in the U.S. and Canada, and hit #6 in Australia and New Zealand. The UK yawned apparently , with it not hitting the charts! At home, however, at triple platinum it is their biggest hit outside of the Best Of compilation. The Grammy Awards took a shine to it as well; it took home the Best Performance Pop Group trophy as well as Record of the Year and Song of the Year for “What A Fool Believes.”

Surprisingly both McDonald and Simmons, as well as Johnston are all in the current touring version of the Doobies.