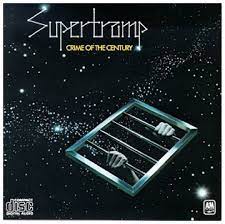 Third time was the charm for Supertramp. After a couple of difficult-to-digest albums that flopped commercially, they got it right with their third album, Crime of the Century, which came out this day in 1974.

Needless to say, they’d had time to work out the kinks in their musical vision between albums. This came over three years after their almost-forgotten second one, Indelibly Stamped, and in the meantime, they’d added a new bassist (Dougie Thompson), drummer (Bob Seibenberg) and perhaps most importantly a horn player, John Helliwell, who helped shape their sound and add color to their stage show from thereonin. That said, as always, the band was a shared concept of Roger Hodgson and Rick Davies, who collectively wrote dozens of songs in their downtime. The band ended up recording 42 tracks for the record, only eight of which made the final cut, although a few were later reworked and added to later albums. Although they tended to each write songs by themselves, the credit was shared equally just as the Beatles had done with the Lennon/McCartney partnership. Lead vocals were shared as well, with four songs each on Crime… being done by Hodgson and Davies.

With only eight used out of 42, there’s little wonder it was quite a strong collection. True to their prog rock labeling, the album still ran over 44 minutes, with three of the songs running well past six minutes.

Although they technically only issued one single from it, and it was only a modest seller, many of the tracks found a home on FM rock stations and remain “classic rock” staples to this day, among them “Bloody Well Right”, “School”, “Dreamer” and the “Hide In Your Shell.” They were fan faves too; no coincidence six of the eight songs made their way onto the band’s live album, Paris.

Although it wasn’t a concept album, it did look a lot at the loneliness of growing up and school life frequently. For instance, both “Bloody Well Right” (a Davies song) and “School” (by Hodgson) were rebukes of what they felt was a failing British educational system. It was probably still fresh in their memories; Roger’s at least. Hodgson was 24 at the time; Davies was already just turned 30. Hodgson said about “Hide in Your Shell”, “I wrote that when I was 23, confused about life…I’ve always been able to express my innermost feelings more openly in song.”

Rolling Stone graded it 3-stars while the Village Voice gave it a middling review, calling them “Queen without (the) preening, Yes without pianistics and meter shifts.” Later on, allmusic gave it 4-stars, calling it when they “came into their own” despite calling them “snarky collegiate elitists, an art rock variation of Steely Dan”.

They issued a two-sided single, so to speak, off it, “Dreamer” and “Bloody Well Right.” In the U.S., the latter was the A-side and gave them their first top 40 hit, in Europe, “Dreamer” got the radio love and made it to #13 at home and #6 in Germany. Overall, the album made it into the top 5 in Britain, Canada and Germany, going gold in the UK and U.S., platinum in New Zealand …but diamond status in Canada! They always had a curious special appeal in Canada, and although it took til after Breakfast In America also went diamond in 1979, it was one of the first records ever to hit that plateau in the Great White North. It also was a rarity in being an album, by a foreign act, that sold far more physical copies in Canada than the much larger U.S.

The album was of high sound quality too, needless to say, being co-produced by Ken Scott, an engineer for several Beatles albums under George Martin. Fittingly, A&M issued it as an enhanced “Audio Master Plus” version of CD in 1984.