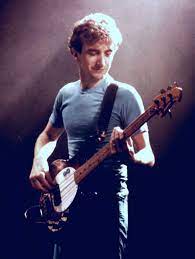 Happy birthday to the quiet piece of one of rock’s biggest and most flamboyant bands. John Deacon, the former bassist for Queen turns 71 today.

Deacon grew up in Leicester, England and was in his first band by age 14, playing guitars at first then bass. Unlike some rock stars though, his music never became his sole passion or purpose, and he went to college, getting a degree in electronics by 21. Around that time Freddie Mercury had his band together with Brian May and Roger Taylor, but lacked a regular bassist. Enter John Deacon.

Deacon wasn’t instantly overwhelmed with the idea. He grew up liking soul music and though he’d grown interested in prog rock and even some classical music by the early-’70s, he wasn’t sure Queen was his calling. The other three thought it was though and won him over.

“We were so over the top,” Taylor says, “we thought because he was so quiet, he would fit in with us without too much upheaval.” Brian May had another reason to like him too; Deacon built him his own amp with his electronics knowledge.

Although mainly just a bass player in the shadow of the flamboyant singer and flashy guitarist, beginning in 1974, he began writing at least one song on every Queen album, including a couple of their best known ones – “Another One Bites The Dust” and one he wrote for his new wife, Veronica, “You’re my Best Friend.” He also played electric piano on that one; besides bass he could play keyboards and guitars and now and again did so with the band.

Curiously, his low-profile extended even towards the critics it seemed. Rolling Stone was lambasted by fans when they failed to include him in a list of rock’s great bassists. Journalist Troy Smith from the Rock & Roll Hall of Fame put him at #16 on his own list, stating “had all John Deacon ever done was ‘Another One Bites the Dust’, he might still have made the list. It’s arguably the most iconic bassline in rock (but) his basslines were the key ingredient on Queen classics.”

Over time he and Freddie became very close so Deacon was especially hard-hit by Freddie’s death. After playing the Tribute concert for Mercury with the band, he said “as far as we are concerned, this is it. There is no point carrying on (the band.) It is impossible to replace Freddie.”

After a few years, Brian and Roger disagreed that Queen had to bite the dust and reformed the group (initially with Paul Rodgers) but Deacon retired. It’s not entirely clear what his opinion of Queen with Adam Lambert is, but Brian May says “John Deacon is still John Deacon. We don’t undertake anything financial without talking to him,” while Roger Taylor says less diplomatically “John’s a sociopath…he’s given us his blessing to do whatever Brian and I might do with the brand. And we’ve done rather a lot.” Tellingly, Deacon didn’t join Taylor and May when Queen got inducted into the Rock & Roll Hall of Fame.

Sociopath or just a musician who felt his band had done all it could do, Deacon lives a fairly quiet life with Veronica and some of his six kids in southern England these days. Brian May recently said he would like to see Deacon in a social setting but had no hope for ever working with him again.