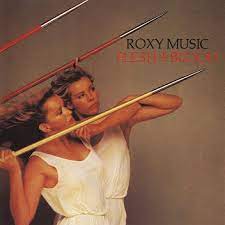 Ever-morphing and ever-popular in Europe, Roxy Music put out their seventh (and penultimate) studio album, Flesh + Blood this day in 1980. The album was surprisingly the first of their records to go platinum in the UK and the second one to top the charts there; it cracked the U.S. top 40 which they’d only done once before.

Roxy was down to just a core trio of Bryan Ferry, Andy Mackay and Phil Manzanera by this time but were well-supplemented with a raft of studio musicians including Paul Carrack on this one. The album was a little uneven and focused largely on love lost and also included a couple of ’60s cover songs – Wilson Pickett’s “In the Midnight Hour” and the Byrds “Eight Miles High.” That marked the first time the band had recorded cover songs, although Bryan Ferry had put out a couple of solo albums in the ’70s consisting of nothing but coves.

Critics weren’t impressed; Rolling Stone called it “such a shockingly bad Roxy Music record” while years later would upgrade it to a 3-star rating saying “good – but lacked the spark that made some of the earlier albums so good.” Allmusic similarly gave it an unusually bad 2-star rating, surprising in that the review wasn’t all that bad really. They suggested that at its best, it was “effortlessly suave and charming”, that “Oh Yeah” was one of their best singles ever, but that the cover songs were superfluous and showed the band was running low on ideas. Ferry’s own website says of it “a record of grace and graciousness, sense and sensuality” and while top 10 singles “Oh Yeah” and “Over You” are good enough, it’s “Same Old Scene” that steals the show. Biographer David Buckley notes it was the band’s “most perfect dance record” and that a year later “the charts would be full of songs with a similar musical trajectory.”

Roxy Music came back two years later with their North American breakthrough, Avalon… then promptly broke up for years. They’d now back together for the first time in years getting ready for a 50th anniversary tour, kicking off Sep. 7 in Toronto.

14 thoughts on “May 23 – Change Was Only Roxy Music Constant”