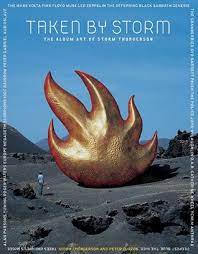 His art took the music world by “storm.” Today we look at a “behind the scenes” type personality who passed away last decade after quietly shaping the music world of our lives. Storm Thorgerson passed away from cancer on this day in 2013. He was 69 years old.

Thorgerson wasn’t exactly a household name. But he had a hand in some of the best-known music of the ’70s through ’90s and was even sometimes referred to as the “fifth member of Pink Floyd.” Not bad for a guy who said he didn’t know one end of a guitar from the other.

Thorgerson was a graphic artist who has made a number of rock’s best known album covers and some of the videos that brought the music to our ears through the TV screen. He grew up in Middlesex, England and went to a school I imagine a lot of our readers would have liked to have gone to. While he was there, Syd Barrett and Roger Waters both attended as well; his family and Waters knew each other and he and Roger played rugby together. Meanwhile, David Gilmour hung around as well and became friends with the others. Thorgerson remembers them as being a little unusual (Barrett especially) but “They’re not as weird as hell,” he told Guitar World, speaking in the present tense about their youth some fifty years earlier. “They have the usual set of passions, but they also have a drive and talent obviously.” And while he first was friends with Waters, he left little doubt as to whom he figured was the epicenter of Pink Floyd’s greatness later on. “I think Dave (Gilmour) lent them a sense of musicianship that helped them to be very successful,” he pointed out.

While the others took off to college and formed Pink Floyd, Storm went off to get a master’s degree in visual arts from the Royal College of Art. Once he completed that, he helped form a graphic arts firm called Hipgnosis, which did visuals for any number of clients. None more famously though than his friends in Pink Floyd. Not only did he create the majority of their album covers and associated art, including Meddle, Animals and most famously the iconic pyramid-and-prism for Dark Side of the Moon, he hung out with them so much the trio of Waters, Gilmour and Nick Wright included him in discussions when figuring out what to do with Syd Barrett when his behavior became detrimental to the band.

Gilmour and Storm became particularly close, with Thorgerson being the best man at the guitarist’s wedding. Gilmour says of Storm’s artwork, “his ideas are not linked to anyone’s idea of marketing… they are atmospherically linked to the music.” And upon his passing away, Gilmour spoke of Storm, the man: “(he was) a constant force in my life, both at work and in private, a shoulder to cry on and a great friend.”

As much as he was in with Pink Floyd and made our image of the “look” of that band, he didn’t limit himself to working on their LP covers. Through the years he did the covers for instantly-recognizable albums like AC/DC’s Dirty Deeds…, Al Stewart’s Year of the Cat, no less than 10 different albums for Alan Parsons including Eye in the Sky and Pyramid, as well as albums by 10CC, Bad Company, Led Zeppelin and later on, the Cranberries and Blinker the Star just to name a few. Although many were drawn or painted images, he said “I like photography, because it’s a reality medium” but adding “I like to mess with reality… to bend reality” with his designs.

Little surprise that such a visually-oriented guy would shift gears in the ’80s, when music videos came to the forefront. When Hipgnosis folded in ’83, he turned his attention to producing videos for most of the rest of the decade and came up with ones including Paul Young’s “Wherever I Lay My Hat”, Nik Kershaw’s hits “The Riddle” and “Wouldn’t It Be Good?”, Glass Tiger’s “Thin Red Line” and of course, Pink Floyd’s “Learning to Fly.”

Prog magazine now has an award given to the best packaging for a musical product. They call it the Storm Thorgerson Grand Design Award. Fittingly, Storm himself won the award in 2012, the last year before he passed away.