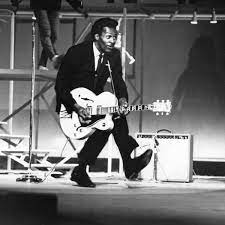 Remembering one of rock’s Founding Fathers. Chuck Berry passed away five years ago today at his St. Louis area home, at age 90. Bruce Springsteen soon after would say Berry was “rock’s greatest practitioner, guitarist and the greatest pure rock’n’roll writer who ever lived.” Although he had a fairly small number of hit records, few if any shaped the future sound of rock as much as Chuck did.

Berry was born in St. Louis, where he spent most of his life, and grew up listening to a mix of Gospel, blues and even country music, all of which would influence the sound he would go on to create. He began playing guitar with a blues group, Johnnie Johnson Trio, around 1950 and by 1955, his idol, Muddy Waters helped him get signed on to Chess Records. His first single, “Maybelline”, got to #5 that year when rock’n’roll was almost an unknown novelty, and as the Wall Street Journal‘s Matthew Osinsky said, “by 1958, Berry had already pioneered much of rock’n’roll’s instrumentation and rhythm.” Not to mention its style -decades before Michael Jackson’s “Moonwalk”, Berry came up with perhaps the original rock’n’roll move – his Duckwalk!

Songs like “Sweet Little Sixteen” and “Rock & Roll Music” helped him become a popular and successful musician… and inspire the next generation or rock stars. Both the Beatles and Rolling Stones would jumpstart their young careers with covers of his songs, while the Beach Boys did so less directly – Chuck successfully sued them for plagiarizing his “Sweet Little Sixteen” on their “Surfin’ USA.”

Berry kept performing until weeks before his death, although his recording career stalled after his final (and strangely enough, biggest) top 10 hit, 1972’s “My Ding-a-ling.” But he was far from forgotten. President Carter had him perform at the White House and he was in the inaugural class of inductees in the Rock & Roll Hall of Fame in 1986, along with the likes of Elvis and Buddy Holly. Nine years after that, he’d play the first Rock & Roll Hall of Fame concert, with Bruce Springsteen and his E-Street Band being the backing musicians.

His memory shone upon his 2017 death, with the New York Times running a lengthy obituary declaring “with his indelible guitar licks, brash self-confidence and memorable songs (he) did as much as anyone to define rock’n’roll’s potential and attitude.” Mick Jagger said “I want to thank him for all the inspirational music he gave to us. He lit up our teenage years,” while Bob Seger noted “Chuck had tremendous influence on my work and could not have been a nicer guy.” Which seems like as good a way as any to be remembered. Long may you duckwalk across the rock’n’roll heaven stage, Chuck.