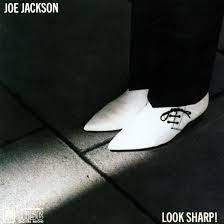 Take a young guy in the 1970s who’s as … perturbed… by his station in life as the Sex Pistols were but had twice (or maybe thrice?) as much talent and you get Joe Jackson, and his great debut album Look Sharp. It came out this day in 1979.

Jackson was a London artist who’d made a bit of a name for himself playing live around the city with a three piece rock band. Jackson himself hammered away at the piano and sang. Of the three others, bassist Graham Maby has proven himself the most durable and in-demand. Not only has he played on over a dozen Jackson albums since, he’s also played for They Might Be Giants, and with Natalie Merchant, Henry Lee Summer and Ian Hunter.

As Rolling Stone noted shortly after, “America’s major labels each…wanted an Elvis Costello to call its own.” A&M Records heard a Joe demo and exec David Kershenbaum signed him up quickly. And even flew to England to produce the record himself. Although a major record label “suit”, he knew his way around a studio and also knew how to let the artist be themselves. As Jackson said a year or so after Look Sharp came out, “a lot of the tracks are first takes and there are no overdubs. We think now that it’s a bit thin.” His fans disagreed.

The 11-song, 36-minute album was snappy, raw and fun. And a little reggae-infused. “I was totally immersed in it” back then he says. The lyrics were witty and biting and railed against the income disparity, sensationalist news media (“Sunday Papers”) and of course, being single. “Is She Really Going Out With Him?” became an anthem for the frustrated and lovelorn and then there was “Pretty Girls,” a song he came to dislike. “It’s kind of a stinker,” he said later, “Ogling girls? That’s kind of lame…but I was 22 when I wrote it.”

The album garnered decent reviews, where it was noticed, and has had even better ones since. To Jackon’s frustration. “I’m not embarrassed by it. Or not most of it anyway. (But) it positively reeks of London, 1978-79. I’m glad people liked it and still like it” though he didn’t think it one of his best works. “I think there’s a tendency to romanticize peoples first albums as though later ones must be less ‘authentic’”. To listeners, it seemed authentic, and full of what Rolling Stone term “painstakingly crafted pop songs with crisp syntax”, singling out “One More Time” and “Sunday Papers” as “a welcome merge of edginess and ear candy.”

Indeed they were, and the hit “Is She Really Going Out With Him?” especially. It made the top 10 in Canada and Ireland and #21 in the U.S., helping the album get to the top 20 in the States, and #40 at home for him. It won him his first ever platinum record, in Canada where it hit that mark in seven months.

Some memorable tunes off a memorable debut with a memorable cover – one Rolling Stone consider the 22nd best album cover ever. And for you fashionistas… those shoes on the cover? A reference tells me they are “Denson Winklepickers”… just in case you too want to “look sharp.”

Jackson himself has kept himself busy since his debut, recording some 19 more studio albums which have spanned the gamut of musical genres from radio-friendly pop to retro-Big Band sounds to classical.