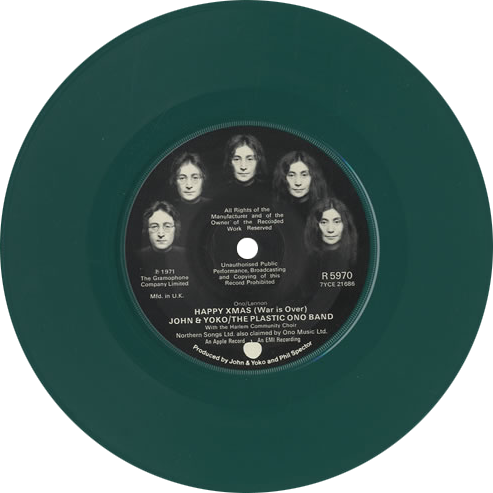 Well it’s December and we all know what that means – full steam ahead to Christmas! Mind you, around here one local pop radio station has been playing nothing but Christmas music for over three weeks. Argue amongst yourselves whether that is excessive or overly excessive! Anyway, with all the interest in the Beatles of late thanks to the Get Back documentary, what better time than to look at the first solo “Beatles” holiday record – “Happy Xmas (War Is Over)” by John Lennon with Yoko Ono. The song, by now a seasonal staple, came out 50 years back on this day in 1971.

By that time of course, John and Yoko were married and had already been outspoken peace advocates, staging “bed-ins for peace”, meeting with politicians to state their case and putting up billboards in a dozen world cities saying pretty much what turned out to be the song title. The signs read “”War is over, if you want it! Happy Christmas from John & Yoko.” So a song seemed the obvious next step, especially after John had had good success with “Imagine.” He said the theme was the same on both : “as long as people imagine that somebody’s doing it to them, and that they have no control, then they have no control.” Or, as Songfacts sum it up “if enough people want something to happen, it will.” In the case of Lennon and Ono, the thing they wanted most back then was to see the Vietnam War end. But yelling from a soapbox wasn’t very effective, as many had found out by then. Lennon noted “now I understand what you have to do : put your political message across with a little honey.”

In this case, the “little honey” was mixing in the political message with a Christmas sentiment, and having 30 children – the Harlem Community Choir add their voices. Lennon recorded it in New York City in October of that year, with Phil Spector producing and a number of studio musicians playing behind him. They included guitarist Hugh McCracken, who’d already worked with Paul McCartney since the Beatles had broken up, Nicky Hopkins on piano and Jim Keltner on drums and “sleigh bells.” Lennon’s friend Klaus Voorman was supposed to play bass, but got stuck in Germany after missing a flight, so an unknown guitarist (Spector brought in four) picked up the four-string for it.

“Happy Xmas (War is Over)” initially came out in North America as a green vinyl 7” single, with a Yoko song, “Listen! The Snow is Falling” on the b-side and an interesting “label” with a series of photos morphing their two faces together. Alas, since “business” is half of “music business”, Brits had to wait a year to buy it. Legal disputes with Northern Songs over there kept it from being released until late-’72 in the UK. The song wasn’t a huge success right away, getting to #42 in the U.S. However, it’s popularity has increased through the years, particularly after Lennon was killed in 1980. Over the years it has gotten as high as #2 in the UK and while not making the U.S. top 40, it has gotten to #3 on Billboard‘s Holiday Music chart and was voted among the top 10 Christmas songs ever by British viewers of ITV. The single is platinum in the UK, and gold in many places including Japan…making it marginally more of a hit than the other notable ex-Beatle Christmas song, Paul McCartney’s “Wonderful Christmastime.”