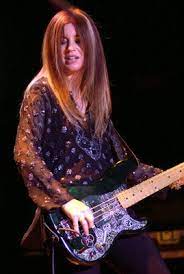 If George was the “Quiet Beatle”, today we wish a happy birthday to the “quiet” one of a band which idolized the Beatles. Happy 66th, Michael Steele! And no, we’re not meaning the one-time lieutenant governor of Maryland.

Steele is best-known as the talented bassist from The Bangles, although we guess her parents knew her best as Susan Thomas, the name she was born with. At age 20 she changed it to the surprisingly masculine-sounding name, although sometimes she’s gone by “Micki” instead. “I guess it’s not as normal as ‘Pam’” she told an interviewer in 2007. “I changed my name in 1976, for personal reasons.” She hasn’t really elaborated on what those reasons were though she did once joke that she thought having a sex change would be the only way to get into a real rock band. Although she’s had her success with doing that and helping along two of the best-loved bands lacking in Y-chromosones.

The southern California girl learned bass as a teen, being a fan of “melodic” type bassists like Paul McCartney, Carol Kaye and later on XTC’s Colin Moulding. At age 20 she joined the Runaways, a band that gave Joan Jett her musical start and was later immortalized in film. She was their bassist, and lead vocalist on most of their songs they recorded for a demo. She left before they got signed and made their first record though. Various reasons have been mentioned, including the rest of the girls thinking that she – at 20 – was too old, her not liking their choice of material, but probably most tellingly, her refusing the sexual advances of their manager.

Through the late-’70s and early-’80s, she played in several local bar bands before getting her big break, joining the Bangles when their first bassist suddenly quit. She joined before they put out their first record. Although ever in the shadow of the Peterson sisters and especially Susanna Hoffs in the group, on their breakthrough album, A Different Light, she sang their cover version of Big Star’s “September Gurls” – a song she recommended – and “Following,” a song she wrote that Rolling Stone considered the album’s “standout song.” Her role increased on the 1988 smash Everything, writing three songs on it and even trying her hand at some guitar as well as her bass.

However, things were far from good for her, or the band at the time so it’s little surprise they broke up. “We didn’t talk enough,” she told The Guardian in 2003, so tensions built up between the four women. None of the four liked the lack of control CBS Records gave them over their recordings. As well, she wasn’t built to be a touring artist. The newspaper described her as “shy” and “awkward” during the interview, in which she said that her decision to leave the band would have probably happened even if the other three carried on. “We went to Japan for the last time and I started crying on the plane and I couldn’t stop…I didn’t realize until years later that I’d had a mini-breakdown. The pressure was so intense that it had to stop, otherwise I was going to come down with some horrible disease.” Indeed, the group had called it quits before the ’90s arrived, ceding the field of “all female rock/pop group” to the harmonic but less musically-adept Wilson Phillips. By the end of the decade, Susanna, Debbie and Vickie were re-forming the Bangles though, and with hesitation, Michael joined them, with the caveat she didn’t want them to be some “Dick Clark oldies band.” They weren’t, and recorded some new music which unfortunately went largely unnoticed, but they were popular again as a touring act. She quit again though in 2003, because of her troubles with the routine of touring. Hoffs diplomatically put it “Michael has since graduated from being a Bangle,” adding that “I’m such a fan of everything she does. She’s really an amazing singer, writer, player and an incredibly creative person.” We believe her but its unfortunate we don’t have more of a chance to judge that – Steele apparently recorded a solo album in the ’90s, but it remains unreleased.

Steele remains a private person but apparently is doing well and living out of the limelight in California. Puts being a star in a “different light.”

13 thoughts on “June 2 – Michael Had Runaway Success With Bangles”