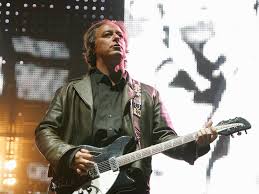 One of alternative rock’s favorite guitarists was born in California this day in 1956. Happy 64th birthday, believe it or not, to Peter Buck of R.E.M.

A number of happy coincidences made Buck one of the leading men of rock – his family moved to Atlanta when he was a teen, he dropped out of Emory U. there and went to Athens to enroll at the University of Georgia, and then got a job at Wuxtry Records there, where he played guitar behind the counter on slow shifts and, more significantly, met Michael Stipe. Stipe and Buck had common interest and long discussions about underground music, soon met Mike Mills and Bill Berry and did a one-off gig at a birthday party for a girl Mills liked. Except of course, it wasn’t a one-off! R.E.M.’s first single, “Radio Free Europe” was put out by another UofG student, Jonny Hibbert, who started his own tiny record label, Hibtone.

Soon after, yet another happy coincidence (as written about by Alan Cross). In an early gig in Nashville, Buck was showing off and accidentally bust his beloved Stratocaster guitar. With more shows lined up, he had to scramble to get some cash and could only find a used Rickenbacker guitar in a second-hand store in his price range. He grudgingly took the guitar used so distinctively by bands like The Byrds and the Jam, and thus was born the distinctive “jingle-jangle” sound so characteristic of the band’s early records.

It worked! He became the musical backbone of the band, and one of rock’s more under-rated guitarists. Disc Makers, for example recently featured him as one of the three “overlooked” guitar stars noting that “in focusing on melody” Buck “couldn’t be more contrary to (the approach) of Eddie Van Halen, the king of guitars at the time”. They note that Buck’s brilliance came from “trying to do justice to the material and (being) conscious about ‘staying in his lane.’” And perhaps having a bit of an attitude. Bono says of him, “when Peter plays guitar, there’s a strong sense of ‘f*** off’ that comes from his side of the stage…I like that energy a little bit.”

When not busy with R.E.M., and since their split nine years ago, Buck’s always busy on side-projects including Tuatara, producing bands like The Eels and perhaps most interestingly, being with Mike Mills in a band called The Baseball Project. All the members of the band love baseball, and write and record tunes about it, and the game’s colorful characters like Ichiro Suzuki and “The Bird” Mark Fydrich. Perhaps not surprisingly for a guy who’s so active in music, Peter loves music. He’s estimated he has over 25 000 records and CDs in his collection.