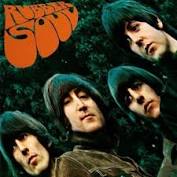 Two of the all-time classic rock albums came out this day in 1965 – in Britain. Earlier today, we looked at The Who’s My Generation, but it was overshadowed by the British band of the decade. Although unlike The Who’s release, over here we wouldn’t have to wait until 1966 to get it, North Americans still had to wait a couple more days before getting our hands and ears on The Beatles Rubber Soul.

The Fab Four were nearing their creative peak at this point with the follow-up to Help. Rubber Soul was about their 11th album (it’s a debatable point because as they’d packaged up some of their songs in different LPs in different countries the exact number varied from land to land) and really showed a growth in both variety and depth to the songs, which include enduring classics like “Drive My Car”, “Girl”, “Michelle”, “Norwegian Wood”, “In My Life” and this one which has been covered well by artists ranging from Bryan Ferry to Anne Murray!

The album knocked the Sound Of Music soundtrack out of #1 spot in the UK after 20 weeks (split into two runs) on top. But make no mistake about it – as popular as Julie Andrews was, it was once again The Year of The Beatles in their homeland. It was the Beatles third #1 LP of that year alone. Over here, it sold an amazing (for the era) million-plus copies in the U.S. in nine days. It would go on to sell over 6 million there alone, the best of any of their albums to that point. Surprisingly, although so many songs off it are rock classics, only one was a hit single – “Nowhere Man”, and that only in North America and a few other markets. It became their 13th gold or platinum single in the States, but for the most part they were content to have people buy the album and rely on “Paperback Writer” – not on the album but a single they had out concurrently – get the AM radio play.

George Harrison, who introduced the West to sitars on it, said it was the “best one (album) we made” and some would agree. Rolling Stone didn’t… but still ranked it as the fifth best album of all-time. They complimented the “taut pop focus” of early Beatles work as well as the “newfound sophistication.” They marveled at how “characteristically, they achieved a new musical sophistication, greater thematic depth without sacrificing a whit of pop appeal.” They particularly singled out “Nowhere Man” – “which (Lennon) later acknowledged was a depressed self-portrait – and the beautifully reminiscent ‘In My Life’” as standouts showing a “more serious and personal style of songwriting” than we’d had from them before. Two of the four albums deemed better than this by the magazine were other Beatles works, Revolver and Sgt. Pepper.. Allmusic and Q both give it a perfect 5-star rating retroactively and it remains one of the best-loved works of the whole decade.